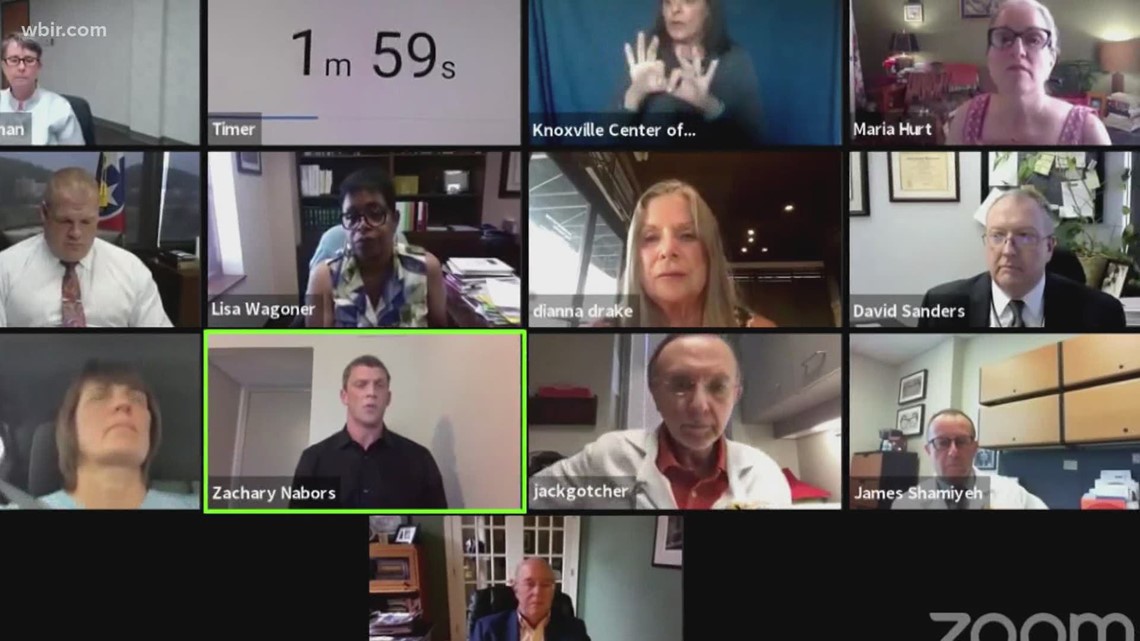 On Monday, the Knox County Commission met to discuss a proposal that would limit the Board of Health’s regulation powers.

KNOXVILLE, Tenn. — On Wednesday the Board of Health met after the Knox County Commission discussed a proposal that would limit the board’s powers to create regulations. After five hours of deliberations and public comments, the commission decided to hold off voting on the proposal until their next meeting on Sept. 28.

The proposed measure also said that Knox County citizens would not be arrested, cited or criminally prosecuted for not complying with an order from the Knox County Board of Health.

Kyle William Ward and Justin Biggs are co-sponsors of the proposal, according to officials. A separate online petition started Knox County citizens also expresses support for the Board of Health.

Hurt is calling out Mayor Jacobs for the Freedom Forward video released after thanking the board for the positions they’re in after last week’s meeting. She says she was angry and upset. She’s sharing the video with the board. #WBIR

On Wednesday, Maria Hurt also raised concerns about a “Freedom Forward” video from Knox County Mayor Glenn Jacobs, posted after the last Board of Health meeting on Sept. 16. She said that the content was dangerous and divisive.

“I saw this video and it disturbed me. It disheartened me. It hurt. We are volunteers, we are the people. As a military officer who has sworn to serve this country, I felt threatened by what I saw,” said Patrick O’Brien, a board member. “If others want to go some other way and shoot by the hip, so be it. You will reap what you sow.”

Mayor Glenn Jacobs said that he did not mean to threaten anyone, but instead wanted to encourage people to speak at Board of Health meetings.

“My intention with that video was not to put anyone in harm’s way, it was not to threaten anyone,” Jacobs said. “The point was to try to get people to talk, to speak out and to show up at meetings. Maybe that didn’t come across as anyone wanted us to, and for that, I apologize. Nevertheless, I have certain responsibilities that I need to do too.”

The video features Jacobs speaking about the coronavirus pandemic and regulations to contain it across the U.S. with images of fire, violence and police sirens accompanying his speech.

“Today, this foundation [the U.S.’s values] is once again under attack — from some ominous enemy abroad and sinister forces within,” he said in the video.

He also said that un-elected bureaucrats create policies “with no accountability and no recourse.”

“So-called experts ordained by the media who weave a web of spin, misinformation and deceit,” he said in the video. “Violent mobs who lust to erect a socialist utopia on the ashes of the republic. And worse of all, an atmosphere of division, hatred and fear conspiring to rob us of our birthright — freedom.”

During the meeting, Jacobs also said that he felt that the Board of Health should be filled by elected representatives. He said that there would be more accountability if the board was filled by people who were elected by the public.

Hurt said boards of health across the U.S. are not usually elected, despite continuing to receive community feedback criticizing the Knox County Board of Health for not being elected.

“Each of us took solemn oaths to protect our patients, when we entered healthcare,” Hurt said. “We did not create the pandemic. Pinning us against people creates the imagery that we are not on the side of the people we are trying to protect.”

Martha Buchanan, the director of the Knox County Board of Health, recommended appearing at the next Knox County Commission meeting to address concerns about the board’s powers. However, Marcy Souza said she did not feel safe enough to appear.

O’Brien said he would be OK with sending a representative.

“I’ve dealt with worse with ISIS,” he said.

Jacobs said that he would stand with O’Brien and anyone else who appeared at the commission’s meeting.

Buchanan says they’re being told by parents and UT that students are purposely not getting tested. #WBIR

RELATED: What a shift in power from the Board of Health could mean for Knox County

Health officials also said during the meeting that they were worried people were choosing not to get tested for COVID-19 out of fear of having to self-isolate or cause others to quarantine. These fears could be the reason for falling cases counts, officials suggested during the meeting.

Officials also announced that the UT was participating in a federal study that would involve students in isolation for COVID-19. The study involves taking several nasal swabs from students, collecting information that would help federal officials create guidelines on managing the coronavirus.

A representative from the University of Tennessee Student Health Center said that federal officials requested the study during a visit to Knoxville and that they hoped the data would help inform future CDC guidelines.

A new research study in collaboration with Univ. of Kentucky includes nasal swab testing to hopefully lessen the quarantine period with results. Dr. Birx recommended this study when she visited. #WBIR

Officials also discussed creating community metrics to help inform future decision-making for the board, including new county cases, testing volume, positivity rates and hospitalizations across the district. Officials also mentioned that the metrics could be used to tell when it would be appropriate to lift regulations.

The board also discussed the mask mandate on Wednesday. Martha Buchanan said that complaints have stayed around the same, mostly about businesses letting people in who aren’t wearing masks.

Officials said no citations or fines have been issued by the Knox County Sheriff’s Office or Knoxville Police Department to people who are not wearing masks. She said that they did intend to give people citations with the mandate — she said in previous meetings that the mask mandate is meant to educate people about their importance.

“It seems like the majority of people in our state do trust the benefits of masks,” Souza said, referencing a study from the University of Tennesee.

The county has benchmarks, but Shamiyeh says there’s been a desire for more concrete marks to make decisions on such as community metrics. #WBIR

Jack Gotcher said towards the end of the meeting that the use of masks and effective PPE made hospitals a safe environment for non-COVID-19 diagnoses, referencing an article published in a science journal. He said that people should not be afraid to go to hospitals for non-coronavirus problems.

‘We saw a need for representation and inclusiveness in wellness’