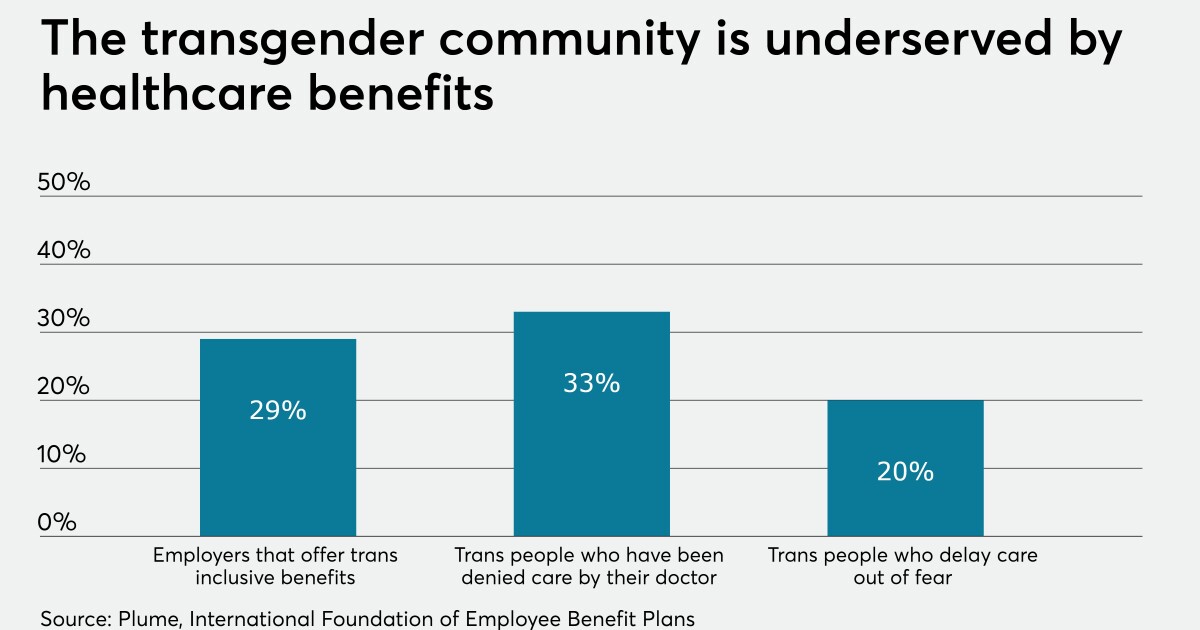 Plume, a health tech company for the transgender community, is entering the employee benefits space with a voluntary health packages for companies catering to those underserved employees.

Employers who offer the Plume benefit will be providing their transgender employees with access to safe and affordable gender affirming hormone replacement therapy through resources administered through a mobile app.

There are 1.4 million transgender people in the U.S., according to research from Williams Institute, a think tank at the UCLA school of law, a rise from 700,000 people in 2011.

Experts say the transgender community is still largly underserved by healthcare benefits, because the benefits are not structured to be inclusive. Many of the life saving treatments transgender people need are considered cosmetic or elective and therefore not covered by insurance.

Only 29% of U.S. employers offer transgender-inclusive healthcare benefits, according to the International Foundation of Employee Benefit Plans, an organization that offers education for the employee benefits community.

Read More: How employers are failing transgender employees in a crucial way

Some employers who offer transgender-inclusive insurance include Apple, General Motors, Coca-Cola, Salesforce and Nike, according to Glassdoor. The organization also found that 67% of job seekers evaluate overall workplace diversity when considering an offer. But even with all of that in mind, employers are not stepping up their diversity and inclusion efforts when it comes to transgender employees’ healthcare.

“It’s still one of the most underserved communities when it comes to safe, accessible and reliable healthcare,” says Soltan Bryce, the head of growth at Plume. “That’s where we come in. We provide safe, expert, gender-affirming hormone therapy.”

Thirty-three percent of trans people say they have been harassed or denied care at their physician’s office, according to research from Plume and 50% of trans people say they have to teach their doctor how to care for them. With that in mind, Plume’s goal is to make an impact in the healthcare for transgender employees who may have unique needs or privacy concerns, and the company realized there was a huge opportunity to reach the community through employee benefits.

Read More: Your fertility benefits may be excluding LGBTQ+ employees from treatments

“Even in less pressing times, over 20% of the trans community delays healthcare for fear of discrimination,” Bryce says. “Nearly 30% of the community in urban areas buy medication bought off the gray market. Those stats by themselves are staggering. But few medical services engage deeply with people’s self expression identity and personal well-being and that is not included in the traditional model of benefits delivery.”

Some key highlights of the benefit include one-on-one consultations with medical providers who have experience in gender-affirming care. Employees utilizing the benefit will also get faster access to services to help with paperwork and other important documentation. Along with resources to answer any questions about elective surgery and selecting the right surgeon.

The Trevor Project, an organization that focuses on suicide prevention among the LGBTQ+ community, is one of the first employers to offer the benefit. The Trevor Project declined to comment.

Nearly 80% of transgender people have either taken gender-affirming hormone therapy or want to take the therapy at some point, according to data from the National Center for Transgender Equality. Half of the trans community has paid for hormone replacement therapy out-of-pocket and almost half of LGBTQ+ people live in states where transgender exclusions in private health insurance coverage is permitted.

“Millennials believe their organization is more innovative when it has a culture of inclusion,” Bryce says.