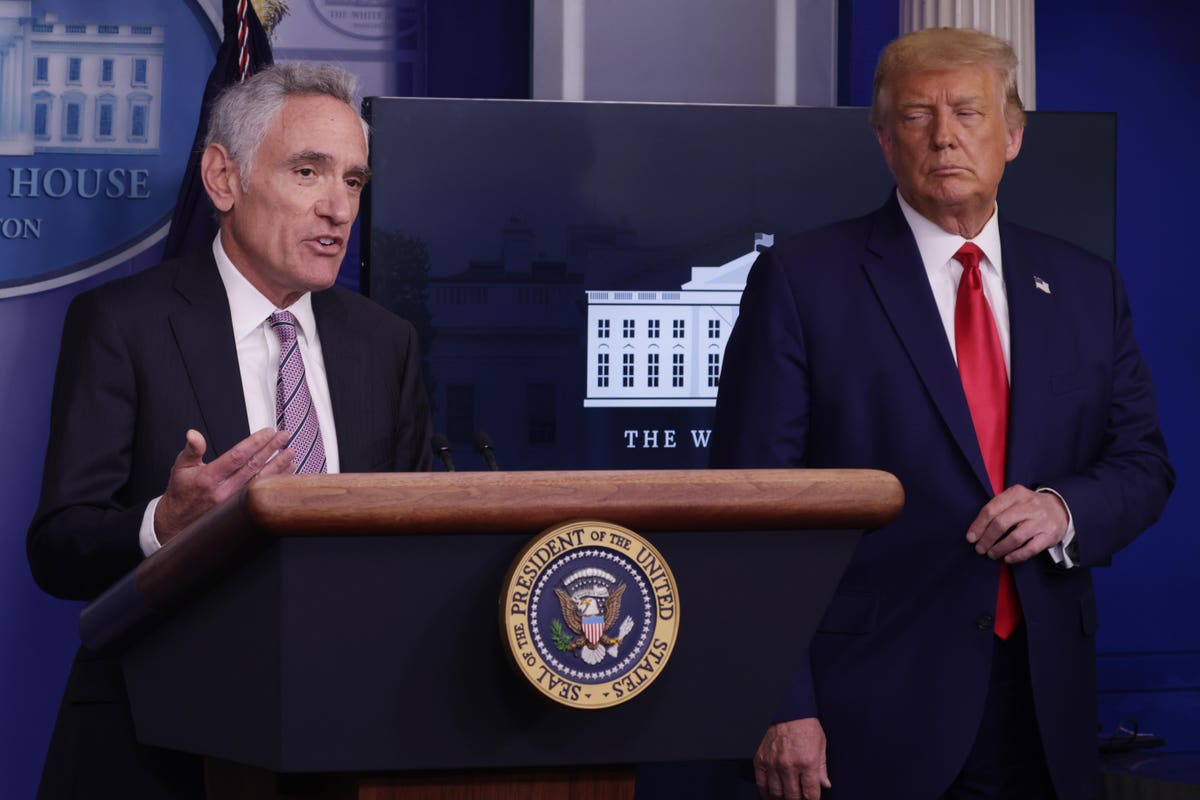 The name “focused protection” certainly sounds a lot better than the word lockdown. After all, the former sounds warm and comforting, while the latter sounds more bondage-like, unless you happen to be into that kind of thing. Nonetheless, as anyone with the same name as a famous martial artist can tell you, names can only go so far. When it comes to ways of responding to the Covid-19 coronavirus pandemic, the actual details of the proposed approach matter.

“Focused protection” seems to be a variant of what has been called the “herd immunity” strategy. The “herd immunity strategy” that Scott Atlas, MD, a neuro-radiologist has been advocating to U.S. President Donald Trump has been dubbed by the Los Angeles Times editorial board as the “let people die” approach. Now, in the universe of possible names, “let people die” doesn’t exactly sound warm and fuzzy.

Nevertheless, some people have actually suggested that sacrificing people may be worthwhile. Just take a look at what Texas Lieutenant Governor Dan Patrick said earlier this year, as shown in this HuffPost video:

A “herd immunity strategy” could be to just let the severe acute respiratory syndrome coronavirus 2 (SARS-CoV2) spread and infect people until enough either died or recovered to gain immunity. The belief by some is that this would eventually allow the population to cross the “herd immunity threshold,” the percentage of the population that needs to be immune to the virus so that virus would no longer be able to readily find new people to infect. Reaching such a threshold would, again in theory, then prevent the virus from further spreading. What would this threshold be? Well, at least 60% of the population but maybe more. Perhaps, 70%, 80%, or more.

That’s led some to suggest a toned down version of the herd immunity approach and name it “focused protection.” This is what’s being promoted by something called The Great Barrington Declaration, a petition started on October 4, 2020, by Martin Kulldorff, PhD, a Professor of Medicine at Harvard Medical School, Dr. Sunetra Gupta, PhD, a Professor of Theoretical Epidemiology at Oxford University, and Jay Bhattacharya, MD, PhD, a Professor of Medicine at Stanford University Medical School. Here is a video of the three authors of the petition signing it and toasting the signing with some champagne, which is an interesting thing to do:

Focused protection would entail allowing people who are deemed “less likely” to die from Covid-19 to be exposed to the SARS-CoV2. The stated goal is to protect those who are considered “more vulnerable” to bad Covid-19 outcomes, while the less vulnerable people get infected and eventually help the population reach the herd immunity threshold. This in theory would stop the spread of the virus with less of the death stuff.

1. Many deaths will occur.

In both cases, people will end up dying. As the U.S. has around 328 million people, 60% would translate to around 197 million people getting infected. Assuming that the Covid-19 coronavirus infection fatality rate is somewhere between 0.5% and 1%, that would mean one to two million deaths from Covid-19. These numbers could get even higher if the herd immunity threshold were even higher than 60%. Maybe fewer would die with the focused protection approach, but lots could still die. Plus, reaching the herd immunity threshold wouldn’t necessarily mean that the virus would immediately stop circulating. Even if over 60% to 80% of the U.S. populations were to achieve immunity, there could still be pockets of the population where immunity levels were below this threshold.

Death is not the only possible bad consequence of Covid-19 coronavirus infections. Surviving the infection is not necessarily a walk in the park. Many survivors of the infection still are suffering symptoms and medical problems.

3. This could overwhelm a broken health care system.

How did the health care system do in places like New York City that got hit harder in March and April? Not so good, right? Imagine what would happen if you were to just let the virus run its course to varying degrees.

4. It’s not clear how long immunity may last.

All of these herd immunity-esque strategies rely heavily on the assumption that you will have long-enough-lasting immunity to the virus after you recover from a Covid-19 coronavirus infection. Otherwise, this could leave everyone in a Groundhog Day situation, where people may get infected over and over again and the magical herd immunity threshold is never actually reached.

Even if you were to develop long-lasting immunity to the version of the Covid-19 coronavirus that initially infected you, what if the virus were to um mutate, you know the thing that many respiratory viruses can do? Would you be immune to a new version of the virus or would there need to be a sequel to Focused Protection, The Virus Strikes Back.

5. How do you define vulnerable people?

For a focused protection approach, how then do you determine who happens to be more vulnerable to worse Covid-19 outcomes. According to the Centers for Disease Control and Prevention (CDC), “having overweight, defined as a BMI > 25 kg/m2 but less than 30 kg/m2 might increase your risk of severe illness from COVID-19.” The CDC also states that 71.6% of people over 20 years of age fell into the overweight category in the years 2015 to 2016. Using these criteria, around three-quarters of the entire adult population in the U.S. would be vulnerable to more severe Covid-19. Does “focused protection” then mean protecting all of these folks? Wait, isn’t that like doing what’s been done so far?

6. How do you identify who is vulnerable?

OK, say you had a relatively clear definition of who may be “vulnerable,” what do you do now: mark them with a big “V” on their chest? Should they keep singing the Selena Gomez song “Vulnerable?” Think that some people will try to sneak themselves into the vulnerable camp. After all, people did try to dodge the Vietnam War with diagnoses like bone spurs.

7. How would you actually protect the vulnerable?

Keeping the vulnerable away from the virus will require quite a lot of coordination. The Great Barrington Declaration is not so great at providing details on how this would actually be done. Would a national testing and surveillance program actually finally be in place to identify who is currently infected and has been infected? How do you support the “vulnerable” people who can’t go to work, stores, schools, or other places in the community now that other people aren’t being careful, social distancing, or wearing masks? Will there be a special fund for them? Will designated run their errands and do their work?

8. This could distract and distract from other possible strategies.

Ultimately, The Great Barrington Declaration may be oversimplifying the choices when it comes to responding to the Covid-19 coronavirus pandemic. Lockdowns, focused protection, and herd immunity strategies are far from the only options. This isn’t like an airplane menu where the options are something that looks like meat, something that doesn’t look like meat, and something that definitely doesn’t look like meat. There are many other things that can be done to prevent the spread of the virus and protect against worse consequences.

The Great Barrington Declaration seems to imply that lockdowns are being used as the primary strategy right now. No scientific or public health expert has really been recommending such a strategy. In fact, no country has really maintained lockdowns throughout the pandemic. Lockdowns should only occur at selected times when they are really needed. Instead, layering on varying measures at different times is the way to go. Think Swiss Cheese, both because it is yummy with on a slice of sourdough with some avocados, garlic, pepper, smoked paprikae, and a sunny side up egg and it is the basis of the graphic accompanying this tweet:

Speaking of Swiss cheese, The Great Barrington Declaration may have quite a few holes in its signatories. The petition website claims that 436,849 concerned citizens, 9,394 medical and public health scientists, and 24,606 medical practitioners have already signed the petition as of October 14. However, Rowland Manthorpe has written for SkyNews about how dozens of the signatories have been rather questionable. For example, there is Dr. I.P. Freely, Dr. Person Fakename and Dr. Johnny Bananas, who listed himself as a “Dr of Hard Sums,” as well as “18 self-declared homeopaths listed as medical practitioners.”

The Great Barrington Declaration hasn’t gotten the greatest reaction from some real infectious disease and public health experts. For example:

Ultimately, calling something “great” doesn’t necessarily make it great, and calling something “protection” doesn’t necessarily mean that it’s protecting the general public. The U.S. has already seen what can happen when you don’t do enough to stop the spread of the Covid-19 coronavirus. With 215,887 deaths to date and counting, that hasn’t exactly worked out great for the U.S.