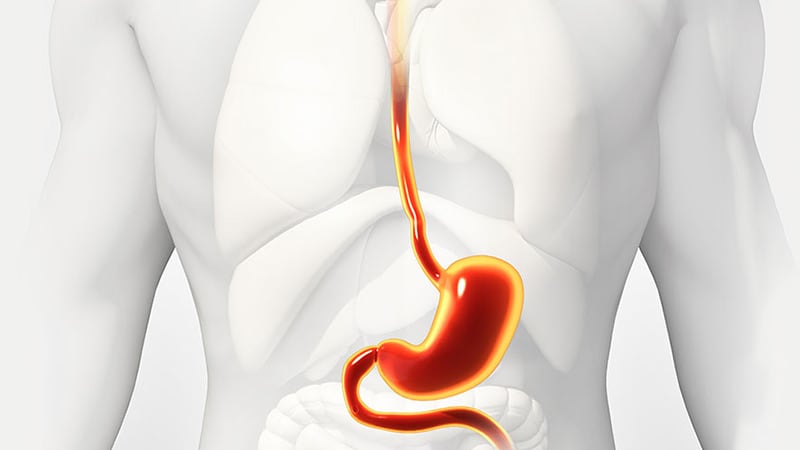 However, contrasting results between the trials and question marks over the effect of the drug in all-comers leaves some questions yet to be answered, despite the “practice-changing” findings, said experts discussing the new data.

The research was presented September 21 at the ESMO Virtual Congress 2020, held online due to the COVID-19 pandemic.

Gastric cancer and GEJ have been an area of interest for immunotherapy in recent years, as standard first-line chemotherapy is associated with poor overall survival at a median of less than 1 year.

The new results come from the largest phase 3 trial of its kind to date, CheckMate 649 , which involved 1581 previously untreated patients with unresectable HER2-negative gastric cancer, GEJ, or esophageal adenocarcinoma.

Patients were randomly assigned to one of three treatment groups:

The proportion of patients with treatment-related adverse events leading to discontinuation were 36% with nivolumab plus chemotherapy and 24% for chemotherapy alone.

At a press conference, Moehler said the benefits seen with nivolumab plus chemotherapy are “highly clinically meaningful” and the combination “represents a new potential standard first-line treatment” for these patients.

These results are “practice changing” and are “clearly significant,” commented Salah-Eddin Al-Batran, MD, Krankenhaus Nordwest-University Cancer Center, Frankfurt, Germany, who was not involved with the study.

“However, as a physician,” he continued, “I am treating an individual patient and, for me, it’s important to know the efficacy in the patients with a CPS of 1 to 4, or of 0.”

“We have to be sure that we do not inflate the results for the all-comers by the very responsive group of high-expressers,” he said, adding that other factors to consider will be microsatellite instability, and tumor mutational burden. “I think these questions have to be addressed to give us a clear picture of how to treat the patient sitting in front of us.”

Surprisingly, the results from ATTRACTION-4 , a very similar phase 3 trial conducted in Japan, Korea, and Taiwan, did not follow the same pattern.

Lead author Narikazu Boku, MD, PhD, National Cancer Center Hospital, Tokyo, Japan, said that, after a median follow-up of 11.6 months, the combination treatment was associated with a significant improvement in PFS, at a median 10.5 months vs 8.3 months with chemotherapy alone (HR, 0.68, P = .0007).

In contrast, there was no significant difference in overall survival between the nivolumab and placebo arms, at a median of 17.5 months and 17.2 months, respectively (HR, 0.90; P = .257).

Invited discussant Elizabeth Smyth, MD, from Addenbrooke’s Hospital in Cambridge, UK, suggested that the lack of overall survival benefit seen in ATTRACTION-4 could be the result of a number of factors, including that PD-L1 status was assessed on tumor cells only and there were no key endpoints based around PD-L1 status.

Moreover, the post-trial therapy could have affected the overall results, as Asian patients typically receive more subsequent therapies than those elsewhere.

Smyth also commented that both CheckMate 649 and ATTRACTION-4 represent a “paradigm shift” in the first-line treatment of gastroesophageal adenocarcinoma.

The results of a third trial presented at the ESMO meeting suggest a role for nivolumab in the adjuvant setting, following neoadjuvant chemoradiation therapy in patients with resected esophageal or GEJ cancer.

This was the CheckMate 577 trial, which compared adjuvant nivolumab with placebo in 794 patients from across the globe.

Kelly said that this is “the first adjuvant therapy to provide a statistically significant and clinically meaningful improvement” in patients with esophageal cancer or GEJ cancer following neoadjuvant chemoradiation.

Consequently, the results “represent the first advance in years for this group of patients, potentially establishing adjuvant nivolumab as a new standard of care.”

However, the invited discussant raised several issues with the trial design. Preoperative chemoradiation is not “universally accepted” as the standard of care in this setting, disease-free survival is not currently validated as a major endpoint in gastroesophageal cancers, and the median follow-up was short, commented Andrés Cervantes, MD, PhD, University of Valencia, Spain, and president-elect of ESMO.

In addition, there was no differentiation between esophageal squamous cell and adenocarcinoma histologies.

Nevertheless, CheckMate 577 is the first positive adjuvant study for checkpoint inhibitors in gastrointestinal tumors and, crucially, the results “are independent of PD-L1 status,” Cervantes said.

Educational efforts increase use of HIV preventive drug in Africa by 55%, study finds

Outagamie County Public Health lists businesses with COVID-19 cases
We use cookies on our website to give you the most relevant experience by remembering your preferences and repeat visits. By clicking “Accept All”, you consent to the use of ALL the cookies. However, you may visit "Cookie Settings" to provide a controlled consent.
Cookie SettingsAccept All
Manage consent