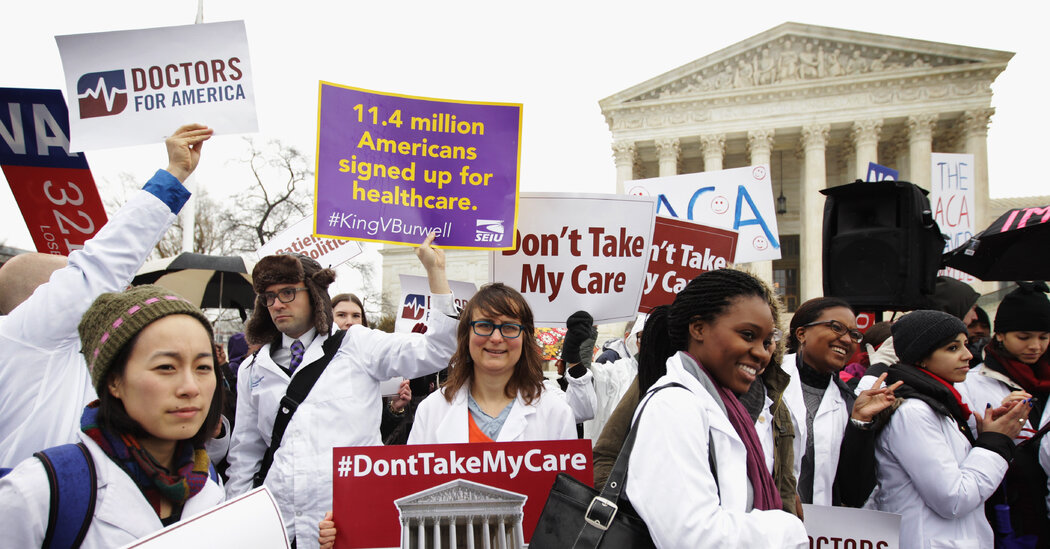 Justice Ruth Bader Ginsburg’s death could not have come at a worse time for the millions of Americans who get their health insurance through the Affordable Care Act.

One week after the election, the Supreme Court is scheduled to hear yet another case about whether the law is constitutional. The case was worrisome enough when Chief Justice John Roberts held the swing vote. But if President Trump succeeds in seating a new justice, the political gravity of the court will lurch even further to the right. A case that once looked like a Hail Mary would stand a real chance of success.

That means more than ever, health care is on the ballot. Joe Biden has already tied the battle over President Trump’s Supreme Court appointee to the fate of health reform, and Democrats should keep banging that drum until Election Day.

What’s at stake is not just the coverage that millions of Americans have gained through the new insurance exchanges and the Medicaid expansion but also the parts of the law that protect Americans with pre-existing conditions.

Other popular provisions hang in the balance, including those that guarantee preventive care with no out-of-pocket payments; end lifetime caps; allow kids to stay on their parents’ insurance through age 26; and make vaccines free to patients. Even some key improvements to Medicare — including a reduction in prescription drug costs for beneficiaries — would be gone.

Overnight, if the Affordable Care Act is eliminated, we will return to the health care system of 2010 — all this as we battle a virus that has killed more than 200,000 Americans.

Indeed, contracting the virus is the ultimate pre-existing condition. The disease can bring with it mysterious complications and affect virtually every organ system, the immune system and even the limbs. Young, otherwise healthy people may find themselves uninsurable if the Affordable Care Act is struck down. Testing and contact tracing will also suffer if people become reluctant to disclose their illnesses, as happened routinely before Obamacare.

The lawsuit stems from Congress’s tax cut legislation in late 2017, which ended the tax penalty for going without health insurance. The Affordable Care Act, however, still had language saying that people “shall” buy health insurance. Without the penalty, the “shall” instruction was meaningless — a vestige of an earlier version of Obamacare.

A group of red states led by Texas, however, built a tortured argument on top of that one word. By keeping “shall” while ending the penalty, they said, Congress must have meant to coerce people into buying insurance. And that kind of congressional coercion is unconstitutional. Furthermore, they claimed that the entire law must go because one part of it couldn’t be legally “severed” from another.

This whole line of argument is preposterous. Commentators and legal scholars on the left and right agree on that point. The Republican-controlled Congress didn’t vote to make the individual mandate more coercive than it was before. It voted to make it less coercive by scotching the only mechanism for enforcing it.

Instead of defending the law against the attack, however, President Trump decided to use the lawsuit as a vehicle for undoing the Affordable Care Act in the courts.

Yet even as President Trump has tried to eliminate Obamacare, the law has only grown in popularity. The more the law is threatened, the more the public realizes its value.

That’s why Republicans don’t want to talk about health care in this election. The topic typically ranks as the single most important issue for voters, who view Democrats more favorably on it. Indeed, Republican losses in the 2018 midterms were widely attributed to the party’s stance on health reform.

But President Trump’s support for a dangerous Supreme Court case offers a simple, clear way to explain to voters that Republicans are lying when they say they support protections for people with pre-existing conditions. The explanation will land with particular force in a country suffering from a botched response to the coronavirus pandemic.

Keeping health care in the news will also focus attention on all the other ways that the Trump administration has worked to make Americans feel less secure: imposing onerous paperwork requirements on Medicaid beneficiaries; crippling the health care exchanges; and sowing discord in the insurance markets. The percentage of Americans without health insurance has ticked up every year since President Trump took office.

The details are complicated. But the Supreme Court case is mercifully easy to grasp. The lawsuit poses an existential threat to the nation’s health care system, and President Trump should be judged for recklessly supporting it.

Democrats could put all of this nonsense to an end — but only if they win big in the election. The Supreme Court is scheduled to hear the case in November, but it won’t issue its decision until the spring.

If Mr. Biden wins the White House and Democrats take the Senate, they could pass a law that either imposes a financial penalty (even a $1 penalty) for not having insurance or wipes the “shall” language from the books. Such a law would make the lawsuit moot before the Supreme Court acts. But if the Republicans mange to hold on to the presidency or either chamber, there is no guarantee the Affordable Care Act, its coverage or its protections will survive.

Passing a law would require Democrats to overcome a likely Republican filibuster — either by proceeding via a special procedure called reconciliation or by eliminating the filibuster. Depending on how the election breaks, however, Democrats may have the votes to do it.

Which is why this year’s election will — yet again — be a referendum on health reform. In the coming weeks, the Affordable Care Act’s supporters have a chance to highlight President Trump’s opposition to protections for people with pre-existing conditions, to demonstrate that ending the law would be a calamity for millions of Americans and to prove that Republicans can’t win elections if they relentlessly oppose the principle that everyone — sick and poor alike — is entitled to health coverage.

Andy Slavitt is board chair of United States of Care and ran the Centers for Medicare and Medicaid Services from 2015 to 2017. Nicholas Bagley is a law professor at the University of Michigan.

COMMENT || If we want a better health system we have to champion reform, not oppose it | The Examiner