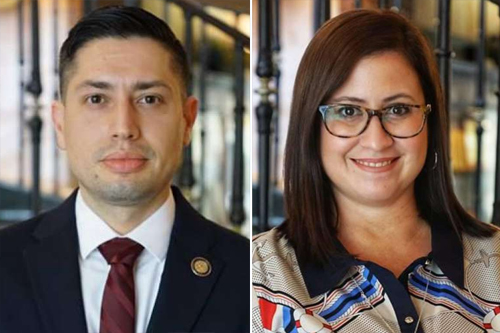 Chamberlain has been serving as interim health director since May, and was promoted to the position permanently Monday. He is currently a candidate for doctorate of public health at Capella University and is scheduled to receive his degree this fall.

Mayor Pete Saenz said he sees Chamberlain several times a week, and that he is well-prepared and well-spoken.

“It was real easy for us. We saw him grow real fast and he’s been with us many years,” Eads said.

City Councilman Alberto Torres noted that Eads gave Chamberlain the opportunity to lead the department on an interim basis and he proved himself. And above all, Torres said, it feels good to see a young person with fresh ideas coming into the city.

“I will always admire the way you communicate, Richard, because you’re very welcoming. You welcome constructive criticism, you welcome public opinion. You do not resist working with anybody,” Torres said.

Negron hails from Carolina, Puerto Rico and has worked at KGNS in Laredo for the past 13 years, most recently as anchor and assistant news director.

Putting information to the public as quickly and accurately as they can is important for transparency, Eads said.

“When the opportunity came up to hire somebody in a (public information officer)-type position, one of the first things that I thought of is someone who knew their way around a newsroom, knew deadlines, had unquestionable integrity and could hit the ground running,” the city manager said.

As communication administrator she will be overseeing the public information office, Eads said.

Saenz said everyone on council knows Negron’s professionalism and independence, something he appreciates.

Councilman Merc Martinez jokingly asked if every time she addresses them that she sign off with her name, and Torres asked if she could start with the weather.

“I’m really excited to come on board here with the city of Laredo, this is such a good opportunity … to bring the city into new light. I’m actually very excited to learn this side of communications and lead the way into what we can do,” she said.