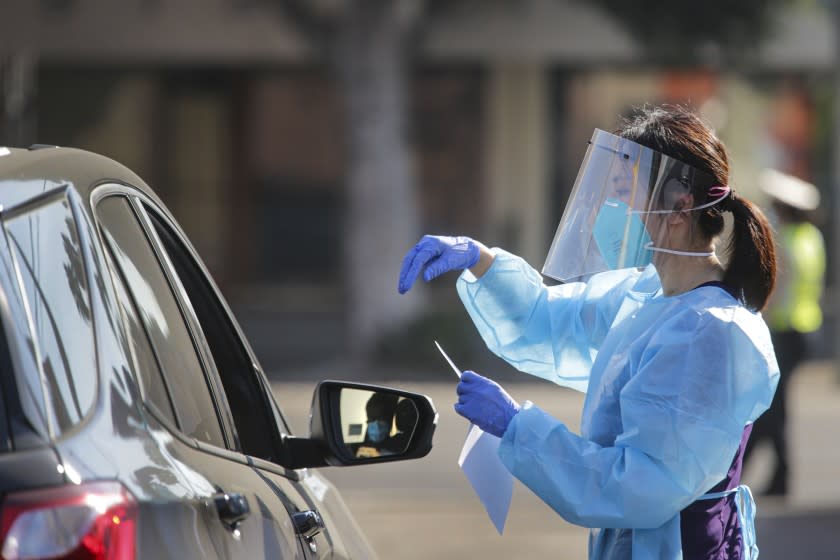 Despite some promising numbers, Los Angeles County is not expected to move into a more permissive phase of relaxing coronavirus restrictions this week, public health officials announced Monday.

In order to decide when a county can move to a new tier in California’s four-phase reopening plan, state officials are keeping an eye on two metrics: the rate of daily new cases per 100,000 residents over a recent seven-day period, which is adjusted to account for how much testing each county is doing, and the average percentage of tests for the virus that come back positive over seven days.

The state also recently created an equity metric that establishes specific positive case rate numbers that larger counties must meet in their poorer cities and neighborhoods.

L.A. County’s overall seven-day average positivity rate — 2.9% — and the positivity rate in its communities that have the fewest resources — 4.6% — both qualify the county to move into Tier 3, or orange, which indicates that community transmission is moderate, Barbara Ferrer, the county health director, said Monday.

But the county last week reported an adjusted case rate of 7.3 cases per 100,000 residents, placing it within Tier 1, or purple, which indicates that community transmission is widespread. State officials have said that a county can’t move out of Tier 1 until its adjusted case rate drops to 7 or less for two consecutive weeks.

“So even if our numbers tomorrow are at 7 new cases per day or less, we would still need another week of qualifying metrics,” Ferrer said.

However, Ferrer said, it’s possible for L.A. County to progress to Tier 2, or red, even if it doesn’t get its case rate down to 7, provided the rate continues to decline, and that its positivity rate and equity metric continue to meet the criteria for Tier 3, or orange.

L.A. County recorded 472 additional cases of the virus and seven related deaths Monday, Ferrer said, though she noted that case numbers are usually low on Mondays due to a weekend reporting lag.

There were 685 confirmed coronavirus patients in county hospitals as of Sunday, compared with more than 2,200 at the peak of the crisis in July.

The decline in new cases and hospitalizations has paved the way for the county to move forward with the latest wave of business reopenings, with casino cardrooms resuming outdoor operations Monday. Schools were also able to start applying to the county for waivers to resume in-person instruction for students in pre-kindergarten through second grade.

That comes after nail salons were permitted to resume indoor services at 25% capacity on Friday. Indoor shopping malls will be permitted to do the same as of Wednesday.

And wineries and breweries are expected to soon be able to reopen outdoors, provided they serve food.

Officials have staggered the reopenings and are keeping a close eye on metrics to ensure they don’t lead to a surge of new cases, hospitalizations and deaths, Ferrer said.

Statewide, the number of daily new cases, total hospitalizations and intensive care admissions continues to decrease, but the pace of the decline has slowed, Gov. Gavin Newsom said Monday.

He also noted that while California’s metrics are relatively stable, at least 21 other U.S. states are seeing increases in transmission rates.

“This is the second wave that many had predicted,” he said.

For instance, Newsom said, California’s average number of daily ICU admissions over the two-week period ending Sunday represented a decline of about 15%, compared with declines of about 20% during previous 14-day periods.

“So again, we’re beginning to see a plateauing, a reduction in the rate of decrease in total number of cases,” he said. “And again, we’re seeing increases in at least 21 states across this country — just a sober, sober reminder of the work that we have in front of us.”

Newsom also said that if new cases were to increase, it would take 20 to 30 days to see a corresponding uptick in hospitalizations.

Woman claims she was raped inside Fairmount Behavioral Health in Philadelphia.

Trump supporters risk their lives for him. Most wouldn’t get the same health care he’s getting