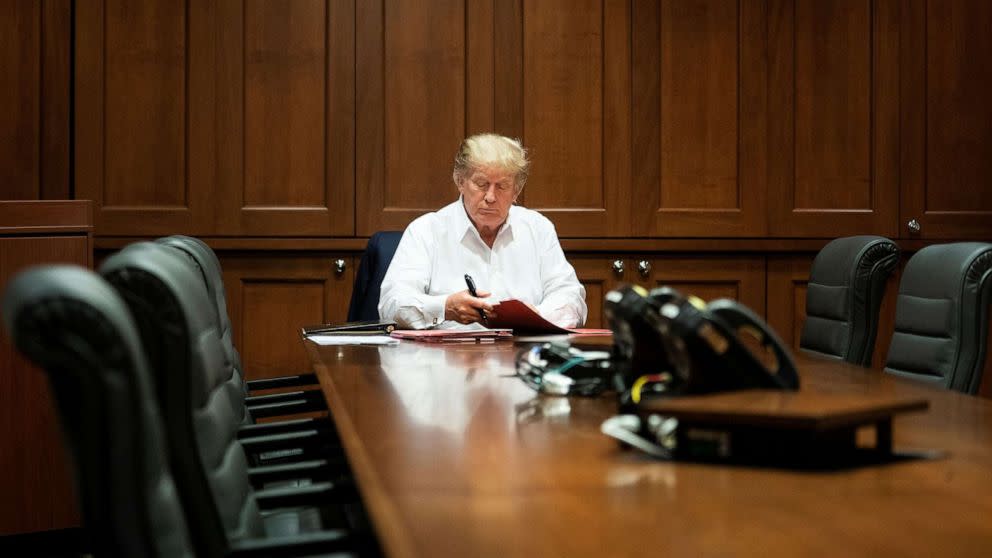 Details of President Donald Trump’s health remained largely unclear on Monday after a weekend of ambiguous and at times conflicting prognoses from his medical staff and senior advisers.

But the combination of drugs physicians have administered to the president – in particular, the decision to use a steroid called dexamethasone – may offer insights into his status, experts said.

“They are doing things for him that would imply he has more severe disease than they are saying,” said Dr. Michael Niederman, a critical care physician at New York-Presbyterian who has not been involved in the president’s treatment.

Dr. Sean Conley, the president’s personal physician, said Saturday that the ailing commander in chief was supplied an experimental antibody cocktail and an FDA authorized antiviral treatment called remdesivir, which is available to hospitalized COVID-19 patients. On Sunday, Conley said a third drug had been added to the mix: the steroid dexamethasone.

Steroids have become a tool for doctors to help reduce inflammation that can cause lung injury and to lower the risk of death in COVID patients, but usually are administered later in the course for those who required repeated supplemental oxygen or are on a ventilator.

In Trump’s case, experts said the administration of dexamethasone may hold clues to key information about the president’s health – in particular, a troubling pair of drops in his oxygen levels. After initially deflecting questions about whether the president had been given oxygen on Friday and Saturday, Conley on Sunday revealed “two episodes of transient drops in his oxygen saturation.”

“We debated the reasons for this and whether we’d even intervene,” Conley told reporters. “It was the determination of the team, based predominantly on the timeline from the initial diagnosis, that we initiate dexamethasone.”

MORE: All the president’s medicine: How doctors are treating Donald Trump

Conley also said the president had been administered supplemental oxygen to respond to the first of his two “transient drops” in blood oxygen, but could not say whether he received supplemental oxygen in the second. On Sunday, the president’s blood oxygen level returned to 98%, Conley said, after dropping into the low 90s during those two incidents.

Without detailed information about the president’s blood oxygen levels, experts hesitated to say whether his medical team’s use of the steroid was appropriate. Most agreed it could be a reasonable addition to the president’s treatment regimen, but warned that there are potential drawbacks.

In general, steroids can limit or slow the body’s ability to shed a virus and cause infections. There was also some concern that steroid treatments could affect the president’s mental state.

“Some patients may develop psychiatric symptoms after being treated with steroids including euphoria, mood instability, rage or psychosis,” said Dr. Lewis Kaplan, the president of Society of Critical Care Medicine and a surgeon at the University of Pennsylvania. “It is rare, but occurs often enough that we recognize them as undesirable side effects of steroid therapy.”

Dr. Richard Schwartzstein, a critical care specialist at Harvard Medical School, said there is some small risk that dexamethasone could leave some elderly patients delirium, but “not for most people.”

In the absence of solid facts about the president’s biometrics, Dr. William Schaffner, an infectious disease expert at Vanderbilt University Medical Center, told ABC News that its use in the president is “a borderline indication within the physicians’ prerogative.”

In his Sunday briefing, Conley evaded questions about CT scans of the president’s lungs, saying only that “there’s some expected findings, but nothing of any major clinical concern.”

Whatever was on those CT scans, Schaffner said, along with his oxygen levels, seems “undoubtedly what targeted physicians’ decision to add dexamethasone,” in hopes that it would moderate his immune system response’s “collateral damage.”

Dr. Peter Papadakos, a critical care physician at the University of Rochester Medical Center, suggested that the use of dexamethasone was likely used in an effort “to decrease the inflammation in his lungs” before his oxygen levels deteriorated further.

“I think they gave him the dexamethasone on that thought pattern: ‘let’s not wait for the president of the United States to be on the ventilator,’” Papadakos said.

MORE: What happens if Trump becomes incapacitated? The 25th Amendment could kick in.

Even so, experts expressed concern that dexamethasone may not be the best course of treatment if the president is not on oxygen, which is what clinical studies have so far shown. On Saturday, after the president went on oxygen, Conley said he only “stayed on that for about an hour, maybe, and it was off and gone.”

In the major trial studying the use of steroids and COVID, “there was clear mortality benefit for those who received invasive ventilation – for those who needed supplemental oxygen – if they had dexamethasone,” Kaplan said.

But Niederman, the New York-Presbytarian doctor, said that “the patients not on oxygen had a trend towards doing worse on Decadron” – the brand name for dexamethasone.

Furthermore, Niederman added that “it is unusual for someone to go on oxygen for a few hours with this disease and then come right off,” as Conley said of Trump.

“The patients that I have seen,” Niederman said, “once they fall, they stay low for a while – they don’t just bounce down and come right back up.”

Those irregularities in treatment could suggest the president is more sick than the White House is letting on, experts said. But it could also be a symptom of what is known colloquially in medical circles as “VIP treatment.”

“When a patient is high profile, there’s a temptation to break away from the standard medical care that you would give to any other patient — and sometimes to the disadvantage to the patient, the VIP,” said Dr. Mark Siegel, a Yale academic and physician.

Siegel said the president’s aggressive treatment plan may reflect an effort by his medical staff “to do more rather than pull back, for fear of being criticized.”

On Monday, ABC News reported that the president’s medical team would decide later in the day whether he could leave Walter Reed National Military Medical Center and return to the White House.