Donald Trump has left the hospital with COVID-19. Was it a good idea?

President Donald Trump left the hospital minutes after tweeting that he was going to surprise supporters outside Walter Reed.

Should President Donald Trump have left Walter Reed National Military Medical Center while he has COVID-19?

Doctors have varying opinions on whether it was a good idea given he’s spent three days in the hospital, required oxygen and is on at least two medications that require IV drugs.

“Feeling really good! Don’t be afraid of Covid. Don’t let it dominate your life,” Trump tweeted Monday afternoon before returning to the White House. “We have developed, under the Trump Administration, some really great drugs & knowledge. I feel better than I did 20 years ago!”

But leaving the hospital now could be problematic, according to some doctors who treat COVID-19 patients.

Although the White House has an excellent medical unit, it’s known that people with severe COVID-19 can deteriorate quickly — within 30 minutes to an hour, said Bob Wachter, chair of medicine at the University of California, San Francisco.

“You want to be 50 feet from an ICU, not a helicopter ride away,” he said.

How sick is the president? Donald Trump latest commander-in-chief to downplay medical troubles

Sean Conley, the president’s doctor, acknowledged in a news conference Monday afternoon that the next week will be crucial to Trump’s recovery.

“Though he may not entirely be out of the woods yet, the team and I agree that all our evaluations, and most importantly, his clinical status, support the president’s safe return home, where he’ll be surrounded by world-class medical care 24/7,” Conley said.

Conley added the president had not had a fever in 72 hours, his oxygen levels were good, he’s was walking around and his breathing was normal. 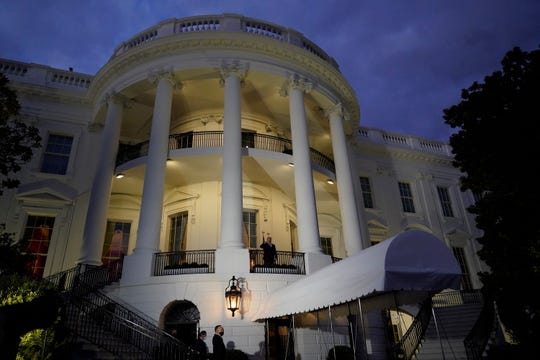 “Today it got to the point, he’s holding court with those of us around him, the whole team, going over all specifics, the testing, what the future is,” he said. “We’ve been back and forth on what’s safe and what’s reasonable, and he has never once pushed us to do anything that was beyond safe and reasonable practice that we all first wanted.”

As the president will have access to high-quality care at his residence, it’s not unreasonable to send him home, said Dr. J. Randall Curtis, a professor of pulmonary and critical care medicine at the University of Washington School of Medicine in Seattle.

‘All of us pay the price’: White House rebuffed CDC offer to lead contact tracing investigation of Trump outbreak

“If he really is getting better, the chance that he will need more intensive care or a ventilator is low. It’s not zero, but it’s low,” he said.

Curtis said he has had patients in their 70s and even 80s who have done well with mild COVID-19 and been able to return home. That’s reasonable “as long as they have someone to keep an eye on them,” he said.

The decision really depends on the clinical judgment of the treating physicians, said Dr. Otto Yang, a professor of infectious disease at the University of California, Los Angeles.

“If somebody has clearly turned a corner and is doing very well and is not requiring oxygen, then it’s not unreasonable to send them home, especially if they have reliable follow up care,” he said.

Curtis emphasized the president’s course of illness can’t be extrapolated to everyone else who gets the disease.

“This in no way diminishes the importance of masks and social distancing,” he said. “Over 200,000 people have died in the United States. It is irresponsible to not take the pandemic seriously simply because one person’s medical course was not that bad.”

Others are less convinced. Wachter noted the president still has two to three days during which he is at highest risk for a sharp downturn in his condition.

“If the president is demanding to return to the White House, it’s a sign of poor decision-making,” he said.

Wachter said he wasn’t privy to the president’s full medical history and it’s impossible to know if he is being affected by the illness, which can cause fuzzy thinking called “COVID fog.” He’s also taking a steroid, dexamethasone, which can cause mania.

But Wachter was adamant that no one who’s hospitalized with COVID-19 should be allowed to make a medical determination of their ability to leave.

White House COVID-19 outbreak shows the limits of testing. Even the most accurate ones can miss the coronavirus early

“The same things that will make you altered in your thinking will also make you unable to make good judgments as to whether you’re altered,” he said.

If he had a patient wanting to leave the hospital three days into a stay for severe COVID-19, who was on multiple medicines and needing oxygen, his strong medical advice would be for them not to do it.

“If they insisted,” Wachter said, “I would have them sign a form saying they were leaving against medical advice, so they could not sue us later for malpractice.”