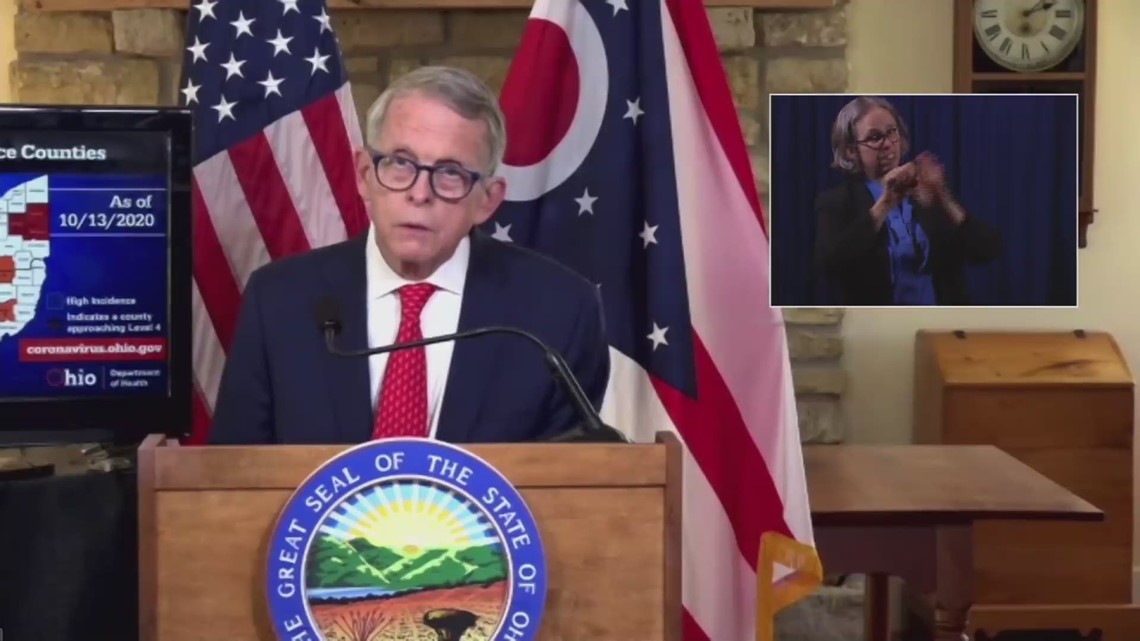 DeWine forecasts ‘tough winter ahead’ in battle against COVID-19

CEDARVILLE, Ohio — As the number of cases of coronavirus continues to rise in the state of Ohio and the overall death count passes 5,000, Gov. Mike DeWine used the first 15 minutes of his Tuesday COVID-19 briefing to lay out some hard facts.

The Ohio Department of Health reported 1,447 new cases as of Tuesday. In the last seven days, the state has averaged 1,475 cases per day by report date. To put this in perspective, Ohio had been averaging a little over 1,000 cases per day only two weeks ago. Currently, Ohio is seeing a 4.1 percent positivity rate, which is still below the World Health Organization’s recommended threshold at 5 percent.

“Things will get better, but in all likelihood, things will get worse before they get better,” DeWine said during his news conference. “This virus is sneaky and cunning and won’t give up. It has a mind of its own.”

The Governor noted that 51 of Ohio’s 88 counties are being listed as high incidence/Alert Level 3 in the state’s Public Health Advisory System.

“This means that if you’re in one of these counties, you should be concerned,” DeWine added.

Despite the recent trend, Gov. DeWine tried to paint a picture of positivity in his remarks, noting that Ohio had achieved a lot in comparison to other states. “Because of you, we’ve avoided a huge spike in cases causing hospitals to overflow. Ohioans have not been spared, but because of you, we’re in better shape than we would have been if you didn’t make the sacrifices you have,” the Governor said.

Governor DeWine also said the state has been given every indication that the President Trump’s “Operation Warp Speed,” which is subsidizing vaccine companies’ clinical trials and manufacturing costs, is working well.

“A vaccine is coming, and judging by the indicators, it’ll work. But the timing isn’t something Ohioans can control,” he stated. “Several people I’ve talked to and the things I can read indicate that by summer, this coming summer, we could be in a position where we’re getting it out, the vaccine out, in a large, large section of our state of Ohio.”

Dr. Amy Edwards of University Hospitals says there are several steps before we see a vaccine for all adults.

“[First we will see ] the emergency approval [which] is going to be based on antibody data and safety data, so we won’t be 100 percent sure it works but for emergency use for high risk people,” said Dr. Edwards.

After that, Dr. Edwards says we will see general approval, which may happen by early 2021. After that, we will see manufacturing and distribution, which brings the idea of wide-spread vaccinations into mid-year of 2021.

“We can work to control this. If we had universal 100 percent masking, combined with social distancing, combined with everybody just stop having parties at their houses and having their friends over and social gatherings that are turning into spreader events…we would be done,” said Dr. Edwards.

However, in the meantime, DeWine says the state needs to prepare for a difficult stretch ahead. “It would appear that we could have a tough winter ahead of us. We are already moving more back inside. Cases are up. Positivity is up. Hospital admissions are up,” the Governor added.